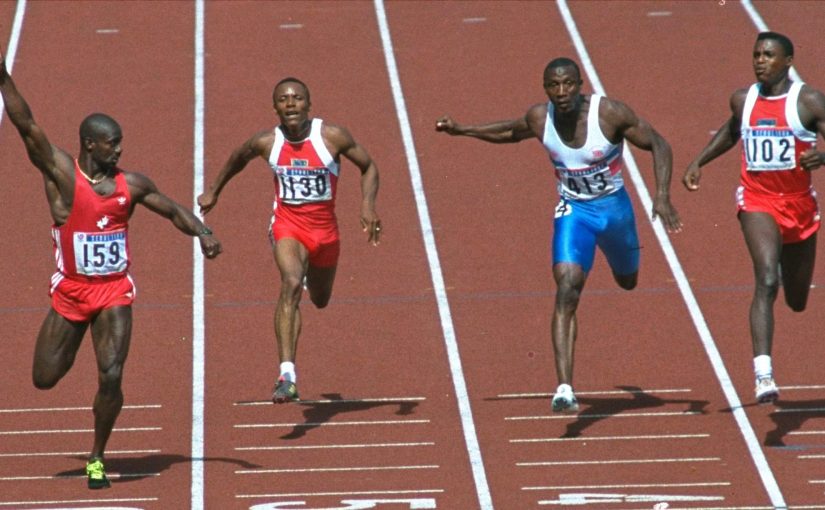 When 9.79*, a film about the ill-fated men’s 100-metre final at the 1988 Olympics, sprinted into cinemas, Oliver Pickup selected his 10 most dastardly cheats

In August 2013, the British Board of Film Classification certified that the film 9.79* – a 83-minute documentary about the infamous men’s 100-metres final at the Seoul Olympics in 1988, featuring interviews with all eight runners – would be classified as PG, meaning it would require parental guidance, as it “contains mild language and references to performance-enhancing drugs”.

Ironically, the BBFC added that “this work was passed uncut”, which is more than can be said for the chief protagonist, a Jamaican-born sprinter who moved to Ontario as a teenager, and his colleagues when they took to the starting blocks in South Korea in what would be dubbed “the dirtiest race in history”.

With his yellow, bulging eyes and increasingly bizarre behaviour leading up to the showdown it was – in hindsight – no surprise that the adopted Canadian was wired and, three days after breaking his own world record (reaching a peak speed of 27mph), was disqualified after his urine samples contained stanozolol, an anabolic steroid. Canada were forced to hand back their first-ever gold medal.

But it seems that Johnson was not alone, and Carl Lewis – the 26-year-old’s biggest rival then, and the man named ‘Olympian of the Century’ by Sports Illustrated – was later found to be one of 10 men in the 20-strong list of quickest-ever 100-metre runners to be scratched off through gobbling performance enhancers. Some 25 years ago the outing of Johnson’s betrayal shook the sporting world – it would be the equivalent of Usain Bolt being busted now – and subsequently the event has been tainted with suspicion ever since.

The marathon at the 1904 St Louis Olympic Games was held on a sweltering afternoon – the mercury on thermometers rose to 90 degrees Fahrenheit – and followed a challenging, mountainous course; the combination meant that just 14 of the 32 starters completed the race.

First back was New Yorker Lorz, who staggered home in three hours and 13 minutes. Having been congratulated by – and photographed with – Alice Roosevelt, the President’s daughter, Lorz was just about to receive the gold medal when it became apparent that he had covered 11 of the 26.2 miles as a car passenger. The crowd’s acclaim immediately turned to anger and abuse, and Lorz was handed a lifetime ban which was later lifted.

The controversy was not to stop there, however. British-born Thomas Hicks, the American who was subsequently handed the gold medal, was aided by a heady mix of strychnine sulfate (a common rat poison) and brandy – a fusion which would not have been allowed in later years. Even though he was supported by his trainers, who had administered the potion to help him complete the course, when he crossed the finish, he was still considered the victor. Rather ingloriously Hicks needed to be carried off the track, and might have died there in the St Louis stadium, had he not been immediately treated by several doctors.

On Nov 11, 1978, the mighty New Zealand All Black rugby team faced Wales at Cardiff Arms Park and, trailing 12-10 with seconds ticking down on what would have been their first defeat of the tour, resorted to dirty tactics.

The All Blacks won a lineout deep in the opposition half and as the ball was thrown in, lock Haden – hardly the most flimsy character at at 6ft 6in and 250lbs – fell away from the set-piece as though illegally shoved. The conned referee awarded a penalty to the visitors, which full-back Brian McKechnie duly converted (although the dual international would get his comeuppance – see below).

Although the All Blacks went on to win the game and the grand slam that year, the incident became known as “the great dive to victory”, and followed Haden, winner of 117 international caps, throughout his career.

In the closing minutes of the 2002 Heineken Cup final at the Millennium Stadium, Leicester Tigers, up 15-9, were looking to hold on to their slender lead against a powerful Munster team. Facing an opposition scrum on their own five-metre line and under tumultuous pressure, the England back-row forward, on the blindside of the referee, illegally nudged the ball out of Munster scrum-half, Peter Stringer’s hands, and back into the scrum on Leicester’s side.

The official missed the incident and Leicester gleefully punted the ball clear and won the game, leaving the Irish club fuming. In ironic reference to Diego Maradona’s own misdeeds against England’s football team in 1986 the moment became known as ‘Hand of Back’.

Forget the recent revelations about Lance Armstrong and his rivals, when it came to cheating in the Tour de France this Belgian rider literally took the piss. After scaling Alpe d’Huez and gaining the famous yellow jersey in the 1978 Tour, the race leader failed his post-stage drug test – not because anything illegal had been found in his urine sample, but because the urine sample wasn’t his.

Officials organising the post-stage test became suspicious when he “began pumping his elbow in and out as if playing a set of bagpipes”, conjuring up a scene from Withnail and I which remained on the cutting floor.

When ordered to lift his top, Pollentier did so to uncover a complex plumbing system running from a rubber, urine-filled bulb under his arm to the test tube.

In the 1985 qualifying round for the Open at Deal, Kent, the former Scottish boys champion took advantage of golf’s culture of honesty and self-regulation. After 14 holes Robertson’s playing companions called an official who disqualified him for repeatedly replacing his ball incorrectly on the greens.

By arriving on the green first Robertson would appear to mark his ball before surreptitiously moving it closer to the hole. The shamed golfer was fined £20,000 and banned from the PGA European Tour for 20 years.

On a very foggy day in January 1990, at Louisiana’s Delta Downs track, Carmouche aroused the suspicions of the stewards by riding home 23-1 outsider Landing Officer by 24 lengths in just a second over the course record.

It transpired that Carmouche, who initially protested his innocence, had dropped out of the one-mile race as soon as he was out of view, only to rejoin it just before the rest of the field came round on the second lap. He finally admitted what he had done and served a ban for eight years.

She was the darling of Ireland after winning three swimming gold medals at Atlanta 1996 – the only gold medals Ireland had ever been awarded* – and one bronze. Suspicions of foul play were voiced by rivals, however, and the fact that her husband and coach – the former Dutch discus-thrower Erik de Bruin – had served a four-year ban for testing positive for illegal levels of testosterone, only elevated those rumours.

Two years after the success at Atlanta the swimmer was banned for four years, not for testing positive, but for switching her urine sample. After laboratory analysis the sample, which had “a very strong whiskey odour” was found to contain traces of the golden nectar.

Although Smith de Bruin was not stripped of her medals – as only samples subsequent to her Olympic involvement tested positive – she became a hate figure among Irish people and, at 28, realised that her time in the pool was over, so now practices law as a barrister.

*Ireland did also win a gold medal at Athens 2004 in show jumping, only for the horse to fail a drugs test, therefore the medal was lost.

Representing Ukraine in the 1976 Montreal Olympics, the respected pentathlete was looking to improve on the silver medal he had been awarded four years previously in Munich.

In his desire to win, Onischenko bent the rules by using a crooked sword. Having wired a switch into the handle of his épée he was able him to claim an electronic ‘hit’ even when he missed. When Great Britain’s Adrian Parker and then countryman Jim Fox reported their doubts over the authenticity of Onischenko’s victories, his weapon was replaced, and he was eventually disqualified. Fencing rules were subsequently changed so that grips that could hide wires or switches were banned.

The Australian did not cheat as such, but his actions simply weren’t cricket, in gentlemanly terms; his unsporting behaviour caused the rules of the game to change.

On Feb 1, 1981, New Zealand were chasing Australia’s 235 in the third final of the 1980-81 Benson & Hedges World Cup Series. With one over left to bowl New Zealand required 15 runs to seal an unlikely victory. Aussie captain Greg Chappell called his youngest brother, Trevor, on to bowl.

Off the first five balls nine runs were scored and two wickets fell, leaving the new batsman Brian McKechnie (see above) with one ball to score a six to win the game. Chappell senior ordered his brother to bowl the remaining ball underarm, crown green bowling style.

Trevor executed his captain and brother’s plan, to the disgust of McKechnie, who threw his bat to the ground after defending the ball, and the dismay of his Australian team-mates.

Due to the ensuing uproar, which almost caused an international incident, underarm bowling was promptly banned and Chappell has never been forgiven by New Zealand or Australian cricket fans alike.

This article first appeared in The Telegraph in August 2013