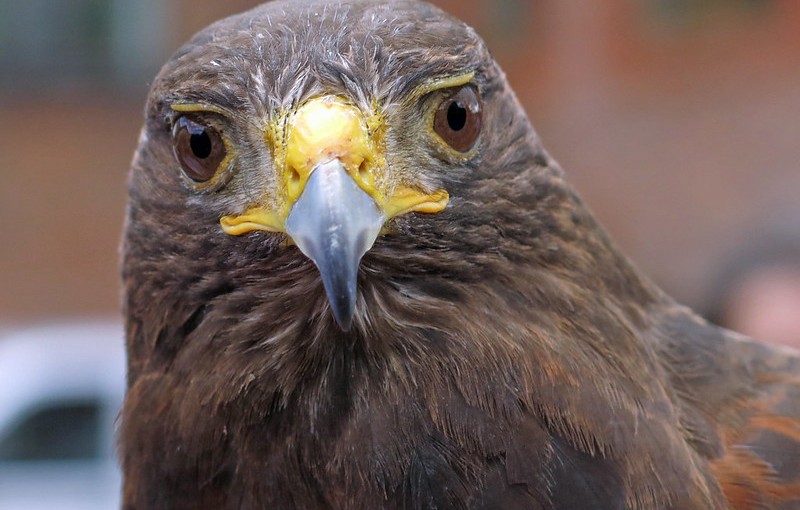 There was a time when ‘birds stopped play’ was a legitimate reason for downing rackets at Wimbledon. That was before Rufus the hawk, official bird scarer, was drafted in to ensure avian invasions are kept to a minimum.

The sky’s the limit for young players at Wimbledon, where a good performance can see their careers take off. But one star of the show will be flying higher than most at the prestigious venue with a vital job to do: Rufus the Harris Hawk.

Rufus is the tournament’s official bird scarer, tasked with frightening pigeons away from the courts. ‘‘Bird stops play’’ used to be a regular problem at Wimbledon, but since 2000 Avian Environmental Consultants Ltd, based in Northamptonshire, has provided hawks to eliminate the problem.

Rufus, who has been working at Wimbledon since 2007, is a celebrity in the tennis world. He regularly poses for pictures during the tournament, has earned a Blue Peter badge and has more than 9,000 followers on Twitter.

Imogen Davis, his handler (and social media manager) since 2012 and director of Avian Environmental Consultants, says: “Pigeons don’t know the difference between eating grass seed when the tennis is on and when there is no play, and that can cause big interruptions. As a player concentration is crucial, so we do our bit to limit that disruption.

“There is an intensive training process, and it is all food-motivated. Harris hawks are not quite like a pet – they don’t just follow you around because they love you – and are one of the few birds in the world that hunt socially; they associate the handlers with food and consider us part of their pack.

“When a pigeon or another bird spots Rufus it’s all about fight or flight, and when a huge Harris hawk with sizeable talons is flying at them they would be daft to choose the first option. The most important part of my job is to monitor his weight.

In preparation for The Championships, Rufus, whose kidnapping in June 2012 triggered global interest (he was found three days after being stolen from the back of Ms Davis’s car), visits the venue most weeks of the year to encourage local birds to roost away from the grounds.

During the competition he is flown from 5am, before the gates open. Ms Davis says that the Wimbledon fortnight is “incredibly tiring” and adds: “I am up from 4am and we are working at The Championships until about 10am every morning. There are some benefits – we get to see some incredible sunrises and meet celebrities, including Andy Murray and Camilla, Duchess of Cornwall – but by the time most of the public have entered we have gone, because it’s our job to make sure all the birds are out of the way before the matches start.

“Rufus will not be flying that whole time; he knows all of the pigeons’ favourite spots to hang out, and he checks them to see there is nothing that might cause any trouble. As we bought Rufus when he was 16 weeks he trained at Wimbledon – it’s basically his playground, and he loves it here.”

This article, sponsored by Jaguar, was first published by The Telegraph in July 2017