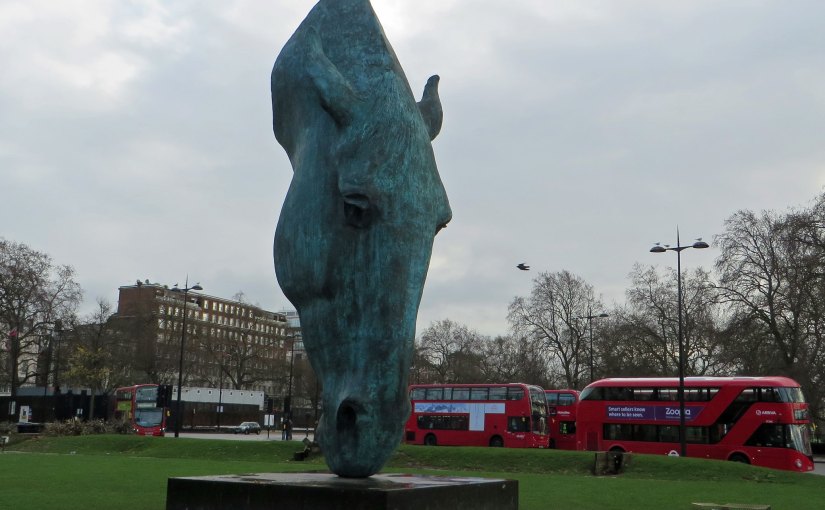 Nic Fiddian-Green has been studying the horse’s head for nearly 30 years and has gained public acclaim with his sculpture at Marble Arch. He discusses with Oliver Pickup his artistic journey, near-death scrapes and taking George, his pet horse, to preview shows

Nic Fiddian-Green, the artist behind the majestic, giant vertical horse’s head on the East Lawn at Marble Arch in London, restlessly follows a dream. The 33 ft’ Horse at Water’, situated at one of the capital’s most important crossroads – an axis where the Rolls-Royces of Park Lane merge with the Middle Eastern bustle of Edgware Road, Oxford Street’s shoppers and the cool urbanites of Notting Hill – has elevated the 48-year-old into the public’s appreciative gaze.

For almost 30 years, the Hampshire-born sculptor, heralded as Britain’s answer to Auguste Rodin, has toiled tirelessly to perfect his obsession; to, as he says, “re-draw the line of the horse”. While wealthy aristocrats and Hollywood stars can boast owning a Fiddian-Green head, his work has seldom been on public display. The Marble Arch sculpture has brought his art to a much wider global audience and spawned yet more grand-scale ambitions.

In mid-September 2011, I visited Fiddian-Green at his Surrey farmhouse, not knowing what to expect. I had been notified about his eccentricities by staff at the Sladmore Galleries in Bruton Place, Mayfair, and Jermyn Street, where his acclaimed summer exhibition had just concluded.

“Make sure you have a good sleep, so you have plenty of energy – you’ll need it,” one warned, recalling how, when he first showed at the Sladmore in 1999, “with all the great and good of the art world in attendance, he clip-clopped into the gallery on his horse, and left hoof prints all over the place”.

Just as my taxi driver’s SatNav declares us lost in deepest Surrey, I gain my first sighting of Fiddian-Green, as he zooms past and gesticulates – wildly and wordlessly – from a battered Land Rover’s window.

The cab trails him up a narrow, muddy lane that leads to the drive of a sprawling residence, complete with barns, stables and various vintage cars. After paying my fare, I turn to see the Land Rover’s driver’s door flung open and no sign of the man I’m supposed to be interviewing.

I enter the building and call out, but there’s no reply. For 15 minutes, I wander, baffled, through the house, where Fiddian-Green resides with his wife, Henri, and their three children. In the happy hodge-podge of the kitchen, I marvel at an unfinished full-size kit-car, family photographs, stacks of art books, and – of course – a number of the sculptor’s famous equine heads.

Suddenly he bounds in and greets me with a wolfish grin before rushing off to attend to various urgent phone calls, including the arrangement of a bobble-hat fitting.

When, with coffee mugs in hand, we eventually sit down some time later, I ask him about the incident at Sladmore: was it true that he had entered the preview show in one of London’s most respected galleries on horseback? “I know, it was bonkers,” he smiles, “but that was George, my horse, and I was pleased that he had made it to the show.”

Fiddian-Green, who graduated from Wimbledon School of Art before completing an MA at Central St Martins College of Art with a focus on Lost Wax Casting, explains where his passion for the horse’s head originated. At the British Museum in 1983 when, as a student at Chelsea School of Art, he set eyes on the 2,400-year-old marble Selene Horse, purloined by Lord Elgin from the Acropolis. And his world was altered, his artistic purpose found. This classical Greek sculpture, displaying elegance, poise and perspective, became his muse and remains a constant reference point.

The Selene head is referenced in his 35ft-high ‘Artemis’ on Trundle Hill near Goodwood, and again at the recent Sladmore exhibition, when a 14ft by 12ft equine head – on sale for £345,000 – took up the main room on Jermyn Street.

Rather than simply producing similar pieces, however, Fiddian-Green has spent his career striving for subtle ways to develop his subject to make it more spiritually rewarding, beautiful, and relevant for the modern world.

The horse, an animal so deeply embedded in our culture, has been a critical feature throughout art history. Indeed, the earliest example of art found in Britain was a horse’s head carved into bone from around 10,000 BC.

But since the horse has become less relevant in society, there have been times when Fiddian-Green has questioned whether he needed to re-adjust his focus. After beginning his artistic journey in the mid-1980s, he was dismayed by the early 1990s that the animals in formaldehyde by Damien Hirst, two years his junior, were so popular.

He recalls those early days working hard to perfect technique in the shed at the bottom of his garden, while Hirst’s work was all the rage.

“That was where art was moving and where the museums were looking – it was where the money was,” he says, “and what I was doing was concentrating on the complete opposite. I thought I was doing something wrong – should I do something nasty, and put a horse’s head in a vat of formaldehyde? It was never going to work. I just needed to be honest with myself. I never questioned it – I knew I couldn’t force it. For me, it was – and still is – about trying to get further into the subject.”

Fiddian-Green calls the great horse painter George Stubbs (1724-1806) “fantastic” for spending 18 months dissecting equine carcasses, thereby mastering his art much as the high Renaissance artists did. Like Stubbs, he stayed loyal to his vision. And, through decades of studying and obsessing over his desired subject, Fiddian-Green is now garnering the praise this constant effort and talent have deserved, thanks in no small part to the siting of work at Marble Arch, which only happened thanks to Henri’s determination.

For, in January 2006 – days after Sir Anthony and Lady Bamford had commissioned a 25ft piece for their Daylesford House estate in Gloucestershire – he was struck down by leukaemia and for three difficult years, interspersed by unpleasant operations and various stints in intensive care, he was a near-permanent resident at the Royal Marsden, a cancer hospital in Chelsea, where his life was in the balance.

Henri, a childhood sweetheart, informed the Bamfords of the dire situation, and they requested that Fiddian-Green finish the project, when, if, he was better. As the artist slowly regained full strength, his wife set about finding a London plot that could house the sculpture while the Bamfords secured planning permission.

By June 2009, Fiddian-Green’s condition had greatly improved, and the Bamfords’ 10-ton piece, ‘Still Water’, was completed and moved to Marble Arch. When, after a year, their planning permission was approved, the sculptor, encouraged by the positive public reaction, self-funded a similar, bigger, replacement for Marble Arch.

In the dead of night, a huge lorry drove the new sculpture from mid-Wales to London, where ‘Still Water’ would be seamlessly switched with ‘Horse at Water’. But there was a hitch: with the replacement horse being seven-tons heavier and 8ft taller, new planning permission at Marble Arch was needed. A last-ditch approval cleared the way, and Fiddian-Green’s costly gamble paid off.

“Marble Arch was so unplanned and accidental, it’s made me re-think my position,” he explains. “It has made me realise that being daring and bold enough to enter the public arena is a good thing. ‘Horse at Water’ is about gentleness in a chaotic world. That is my mission: to draw people into the stillness. There is an element of contemplation and spirituality.

“That is what is so fascinating about Fra Angelico and the others in the early Renaissance, because they really didn’t understand much about the rudiments of drawing and perspective and colour and form, but they understood about the spirit, probably deeper and greater than those who would come later.”

In his studio, which looks like a blacksmith’s hovel, Fiddian-Green draws on a cigarette and says: “Time now bothers me. It is limited, and I’m conscious of that – more so from being ill. I’m now prepared to risk it, take a bit of a chance, which I probably wouldn’t have said before. I wouldn’t have been daring or brave enough to risk it.”

Following a chance meeting at the Sladmore with an Italian who trains Spanish horses in the depths of Umbria, Fiddian-Green’s odyssey continues, and in the new year he will fly to Perugia to re-draw the line of the horse once again.

He enthuses: “I have to take all my opportunities. At the same time, I don’t want to force any issues; over-push it. I’ve always been one to try and let things happen in their own time. I want to let it take its natural course as much as possible.

“I have allowed myself to be led to this place, and I shall follow. It is natural, unplanned. I need to engage in the business of allowing it to happen, and not worrying about it. That’s the trick: just being able to let it go.

“It’s a quest for perfection – it doesn’t matter too much if you don’t achieve it; you will never find it. We’ll see what happens in Italy. Maybe nothing. Maybe something amazing. It’s a great dream.”

This article was first published in Seasons magazine in autumn 2011